God Loves You. He Also Respects You.

Description
“Jesus loves you, this I know.” But did you know He also respects you? Think about what that means. God respects your freedom. As mighty as He is, the one force in the universe he’s chosen not to be able to overcome is your will. He died to offer you salvation, but He’d never force it on you. If you were there when He walked to the Earth two thousand years ago and He came to your door, He’d ask, “Is it OK if I come in right now?” And even though He could do all the work of spreading the Kingdom and helping the poor all by Himself, He chose in His plan of salvation to need YOU. If you don’t say yes, if you don’t fulfill the work He gave you to do, it might never get done. So God humbly asks, “Will you follow Me? Will you help Me?” He respects your body. In the Eucharist, your flesh becomes a tabernacle, a dwelling place of God. His touch healed people. It was gentle. It wasn’t forced. It was never uncomfortable. It was like a good dad raising his daughter up. And if He touched you, He’d probably first ask, “Can I take you by the arm?” He respects his relationship with you. Jesus said, “I call you friends.” He doesn’t just call us sinners in need of salvation or damsels in distress, in need of a hero. He’s gone further than that. God, the maker of all things, has raised you up to the status of friend. He wants your friendship! And He asks, “Will you be my friend?” You are sacred, unrepeatable. The creator of the universe respects you. I think maybe you should start treating yourself with some respect, too. 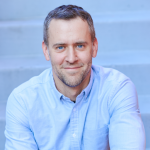