Ven. Fulton Sheen on the Passing of Time | HOMILY

Description
"Each new year is actually a testing and proving ground for eternity ​— ​a kind of novitiate in which we say 'aye' or 'nay' to our eternal destiny." A world of difference exists between the old and the young in their attitude toward time. As St. Peter said in one of his first Pentecostal sermons, "The young men see visions, the old men dream dreams." The old look backward, the young look forward. With the passing of each new year time goes more quickly. But with youth, time proceeds slowly. Hence the young live in the future and in hope, but promise. Lacking experience they are apt to think that the emotions, and pleasures, and thrills of youth continue all through life. Hence, when a new year rolls around the aged or amazed, the time passed so quickly. The young would like to give time more wings in order that it might speed both their pleasure and their hope. Both are apt to forget that time is a part of eternity. Just as our present moment has a memory behind it and a hope in front of it, so too, time is like one circle that is locked in another circle. Time is so precious that God doles it out second by second. If life in the past has been evil, the new year is an opportunity for penance. If life however has been virtuous, the new year is an opportunity for greater self perfection. Each new year is actually a testing and proving ground for eternity. A season of plenty from which we shall later on reap either wheat or weeds. Time is equivalent to what can be done or gained by it. At the beginning of the new year, therefore, we wish everyone that it be happy. Because we know that there is no greater melancholy sadness than to use time for any purpose, but the supreme one, which is the salvation of the soul. 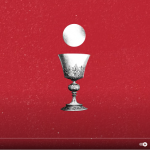